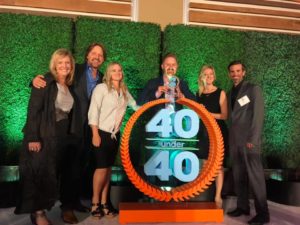 IRVINE, Calif. – Aaron Antis, 33, was named one of Irvine Chamber’s 40 Under 40 for his early success in the roofing industry. The awards were bestowed at an event on October 3, in tandem with the Chamber’s 40th anniversary. Forty young executives, business owners and community leaders received acknowledgment from the Chamber for their remarkable achievements made before the age of 40.

Aaron Antis, Vice President of Sales and Field Operations of Antis Roofing & Waterproofing, joined the company in 2007 as a trainee roofer and has trained and worked in all of the company’s core business departments since then. In 2018, the National Roofing Contractors Association (NRCA) selected Antis as one of 36 emerging leaders in the roofing industry to attend NRCA University’s Future Executive Institute at Northwestern University’s Kellogg School of Management.

Antis’ deep knowledge of the roofing and homeowner association sector made him a sought-after partner with boards of directors and community managers seeking to address vital roofing issues. He developed and led training programs for them to become more effective stewards of their communities.

“I am continually awed by the talent and innovation demonstrated by so many of Orange County’s younger professionals, and give kudos to the Irvine Chamber of Commerce for stepping up to recognize them with its first-ever “40 Under 40” award celebration,” said Charles Antis, founder and CEO of Antis Roofing & Waterproofing.

Nearly 300 submissions were received by the Chamber. Winners were selected based on their achievements, community engagement and demonstration of integrity.

Founded in 1989, Antis Roofing and Waterproofing is a fully licensed, bonded and insured provider of roofing and waterproofing services for homeowner’s associations and multi-tenant housing communities in Orange, San Diego, Los Angeles, Riverside and San Bernardino counties. The company is also a CACM industry partner.