ON DEMAND EVENT! DON’T MISS THIS!!!

Effective leaders must understand the future of our economy to make important decisions and guide their teams. Back by popular demand! Dr. James Doti, professor and president emeritus at Chapman University, will present the Chapman Economic Forecast – a highly anticipated forecast for business professionals. In addition to sharing the US Forecast, Dr. Doti will take a deep dive into California’s forecast. Discover what this rich insight means for you and the industry.

**Non-Members and Industry Partner members must call CACM to register and for pricing.

*CACM will provide registrants with the link and password to watch the pre-recorded Zoom webinar event. Registration will be open from June 28-July 7. As this video is property of Dr. James Doti and CACM, the video link for viewing will be distributed and active from July 8-July 16 ONLY. 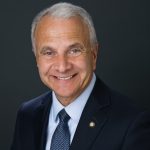 Dr. James L. Doti is President Emeritus and Professor of Economics at Chapman University. He earned his M.A. and Ph.D. degrees from the University of Chicago, where he was an Edward Hilman and National Science Foundation Fellow. He joined Chapman University in 1974 and in 1978 founded the University’s A. Gary Anderson Center for Economic Research, which, under his leadership, has become nationally recognized for its scholarly research and economic forecasts.

Between 1991-2016, Dr. Doti served as President of Chapman University. During this 25-year period, Chapman experienced a sharp increase in student selectivity and academic stature.

In addition to writing many peer-reviewed articles in academic journals, he has co-authored two textbooks entitled Econometric Analysis with EViews, Fourth Edition, and Statistical Analysis with Excel, Third Edition. Dr. Doti has also co-authored The Market Economy – A Reader, which received the Templeton Honor Award for Scholarly Excellence.

Dr. Doti is a leading figure in the Orange County business and academic communities. He also serves on the boards of First American Financial Corporation and Whittier Trust.

As a long-distance runner, Dr. Doti has completed 60 full marathons, including ten runnings of the famed Boston Marathon.

Association Prime believes in the value of understanding how economics impact the community management industry and your bottom line. With that in mind, we approached CACM to strategize ways to broadcast Dr. Doti’s Economic Forecast to managers across the state of California. We are excited to bring you this webinar event in conjunction with CACM.
In our consulting and CEO groups, we coach management company owners on setting a strategy aligned with economic factors. We believe strongly that there is no one more qualified than Dr. Doti to provide that insight and we encourage everyone to attend this event.